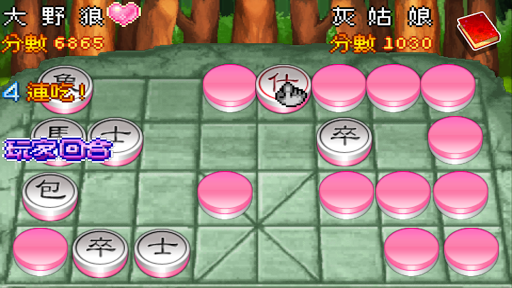 Now, it supports the Chinese language only!(繁體中文)
==STORY==
In order to sell herself out, live happily forever with the Prince Charming, the witch drank the magic poison to become a beauty and introduced an Oriental puzzle game – Dark Chess. The Witch held the Dark Chess contest. The winner will get the witch, her castle, gold and shinning jewelry. Porky Pig who wants to change to a big house, Princess Frog who doesn’t want to live in the bottom of well anymore, Cinderella who has compulsive disorder of cleaning, all are lusting for the big castle. This time, the Sleeping Beauty Ornora, the wife of Shrek, and other funny characters of fairy tales kingdom will bring you more fun. Do you think you will win? You might laugh to lose!
It’s a variant of Chinese Chess. All the pieces face down. The player turn over one piece, the color of the piece will belong to the player. All the pieces can move horizontally or vertically to another free space or take opponent’s piece except the Cannons have to jump over another piece to move or take opponent’s piece. It is a three point match. The first player to score two points therefore wins the match. If there is a draw, the player will play again until someone wins the game.
There are two modes of this game, Starting Adventure and Free Battle.
Fixed some bugs.