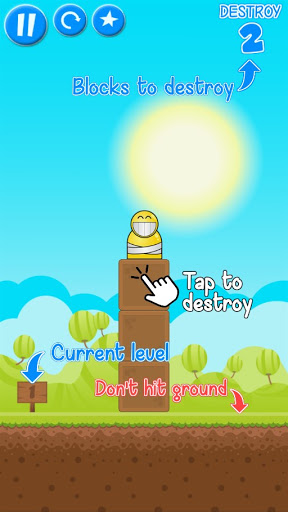 The gameplay is focused on solving levels where each new level has a higher difficulty than the previous. The first round starts with an intuitive, animated tutorial.
Game consists of six diverse worlds, each holding twenty-five levels. Each world is characterized by a different gameplay style, for example changing the physics or adding new elements.
In the game we see the Gold Totem, which stands on various blocks. Those elements disappear on-click and move the whole construct.
When we destroy a set amount of blocks and our Totem stands on any block, that seperates it from the ground, a countdown starts after which (if the Totem does not fall) the level is solved.
A puzzle is not solved if the Totem touches the ground, falls off the edge or there are remaining clicks.