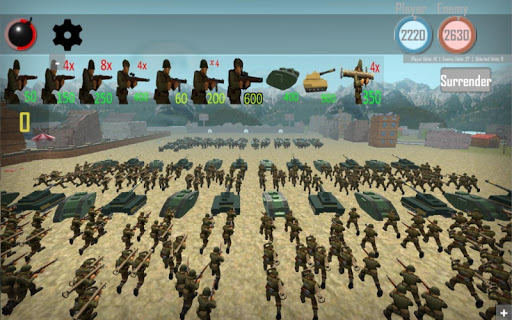 WORLD WAR II: SOVIET BATTLES RTS GAME
Deploy your army and defeat cruel enemy armies.
Epic world war 2 real time strategy game for free! Conquer all of enemy! Get ready to simulate the deadliest world war 2 battles of the 20st century in bases full of monstrous enemy military base. The rivalry forces have attacked your bases and your base with the military tanks, soldiers has turned it into battlefield. The enemies are in the ferocious tanks that are loaded with explosive weapons. You being the general need to destroy the deadly beasts in the best way possible and capture enemy base by totally destroying their military bases. Enemy leader has created an alliance against you and your president decided to defend homeland and also capture all enemy hold countries. However it is very hard to conquer all Eastern Europe. So, very fierce battles waiting for you, General! Move carefully, defend your country.

It is very easy to play the game, click on battlefield to deploy your units and move camera left, right, forward or back.

Free form quest map that allows players to decide when and where to fight within a historical framework. More than 9 different units all accurately researched and carefully modeled in amazing detail. Almost infinite number of equipment combinations.